The Brunswick at Saratoga Bed and Breakfast is located in the heart of Saratoga Springs–the elegant, eclectic city at the foothills of the pristine Adirondack Mountains in Upstate New York. The famed Saratoga Race Course (Thoroughbred horse racing) is directly across Union Avenue from our hostelry.  The National Museum of Racing and Hall of Fame is less than a block away, and the Saratoga Raceway (harness racing) is less then one mile from our cozy front porch. Saratoga Polo and several Dressage and horse shows round out the equine offerings in our spectacular region.

For those whose interests are not restricted to hooves, manes and saddles:

Two blocks to the East of our historic inn lies Congress Park and the gateway to downtown Saratoga Springs–the biggest little city in the world.  Congress Park is home to the historic Canfield Casino and the Saratoga Arts Center.  In and around the Park lie four of our world-renowned mineral springs:  Congress, Columbian, Deer Park and Hathorn #1.  The Spirit of Life resides within Congress Park as well:  she is a magnificent bronze statue commissioned in honor of beloved Saratogian, Spencer Trask, and was built by Daniel Chester French–he who created the revered Abraham Lincoln for the Lincoln Memorial in Washington, D.C.  The Spirit of Life is the official symbol of all that our city has to offer.

Other nearby attractions include the Spa State Park, which consists of two golf courses; two public pools (Peerless, and the elegant Victoria); the gorgeous Hall of Springs and Roosevelt Baths and the Saratoga Performing Arts Center (SPAC).  SPAC is the summer home of the New York City Ballet and the Philadelphia Orchestra, as well as virtually every popular music and dance group that tours during the summer.  On South Broadway, near the Park’s entrance lies the fabulous Lincoln Baths and  the National Museum of Dance and Hall of Fame.  (Both Roosevelt and Lincoln Baths offer hot [104F], effervescent mineral baths and all the joy of world-class spa experience:  massages, hot stones and natural therapies to envelope the body and the soul.)

More to Explore in Saratoga Springs and Saratoga County…

With over 200 restaurants and taverns within our city limits, and countless museums, sports and relaxation facilities–truly, Saratoga has something for everyone. Sporting enthusiasts will enjoy the many nearby golf courses; tennis and racquetball; boating, kayaking, paddleboarding and fishing on peaceful Saratoga Lake.  CDPHP has bikes that you can rent, located all around town.  We are a short drive to the beautiful Adirondack trails and Lake George. And, during the winter months, the Spa State Park and many other locations throughout Saratoga County offer cross-country skiing, festivals and other cold-weather activities.  History buffs will find a city rich with over 700 years of myth, legend and fact.  Chief among our historic spots are the Saratoga Battlefield in Schuylerville; Congress Park and the Saratoga Race Course–the Grande Dame, the oldest sporting venue of any kind in the United States.

Come to Saratoga, for all we have to offer.  At The Brunswick at Saratoga Bed and Breakfast, you can begin your days with a spectacular gourmet breakfast, and rest your weary self at end-of-day in the cozy warmth of our singularly-welcoming inn. 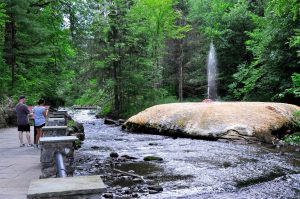