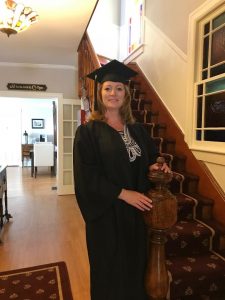 Chef Kate Amello, in her regalia

We at The Brunswick at Saratoga Bed & Breakfast took a few minutes off on May 16th to trek down Route 50 to Schenectady.  The occasion?  The graduation of our own Kate Amello from the Culinary Arts program at Schenectady County Community College.

SCCC’s is the only post-secondary program in Culinary Arts in New York State, that’s accredited by the American Culinary Federation with Examplary status.  (And we surmise that our Kate was an exemplary student, of course!) 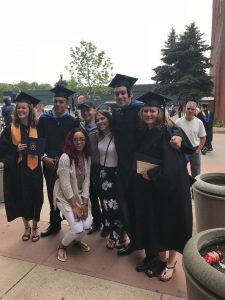 Kate crossed the stage of the historic Proctor’s Theatre in downtown Schenectady to receive her Culinary Arts A.O.S. diploma, graduating with 324 enthusiastic, hard-working colleagues.  Kate had put her heart and soul into the program, the journey to which began on a part-time basis during the summer of 2014.  She took two courses, with the intention of building up her confidence as a cook.  (She had in mind that one day, she’d have to cook for 20+ people in her dream B&B situation.  A dreamer and a forethinker!)

Quickly, she became enamored with the program, and made the decision to continue pat-time ’til 2016, when The Brunswick became Kate’s reality.

Kate is not one to walk away from opportunity or challenges when they present themselves…so she went straight to work as owner of The Brunswick, while taking courses at SCCC.  In the Autumn of 2017, she became a full-time student (while seamlessly running this place)—because that designation, Chef, loomed before her and she was eager to receive the reward that comes from all her hard, focused work. 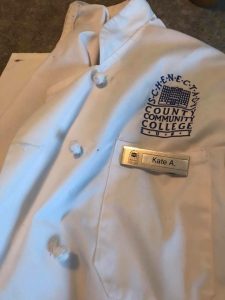 During her tenure at the College, Chef Payne (her Culinary Instructor for Food Prep I, II and Dining Room), suggested to her that—if she was truly interested in owning a B&B one day—she should apply for the job, Assistant Innkeeper at the stately, well-established Batcheller Mansion Inn in Saratoga Springs.  She interviewed and was hired that very day.  After several months in the position, she was promoted to Innkeeper.

Kate effuses that she learned so much during her time at the Batcheller, an experience for which she is eternally grateful. 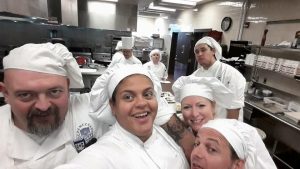 Kate had a dream.  She shared her vision with her family, who saw the passion in her eyes, and heard it in her voice.  She gave it her all in school, and applied everything she was learning as she took the reins of The Brunswick two years ago.  Her instructors, chefs and fellow students at SCCC (like, The Four Pack)–spiced her journey with their friendship, insights and encouragement.

With the strong support of such a network of good hearts, it’s no wonder that Kate Amello today is one of the precious few Chef/Owners of an historic Bed & Breakfast in the most hospitable city on Earth—Saratoga Springs.  Thanks for bringing us all on your journey, Kate!

One thought on “The Brunswick at Saratoga B&B: Now, COO (Chef-Owned and Operated) :)”