Where would horse racing be, were it not for the magnificent steeds, and their people of truly good heart who make it happen, day-in and day-out?  Those for whom the words, “community” and “decency” mean something? 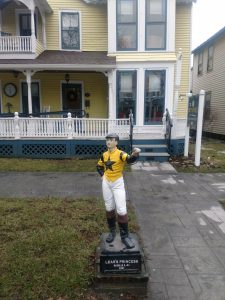 Chief among those people who hold decency and community close to their hearts–values that everyone should embrace, of course–tonight, we at The Brunswick at Saratoga must point our gratitude in the direction of Terry Finley and Tom Bellhouse of West Point Thoroughbreds.

You see, Monday, April 16th was the first day for workouts at the Oklahoma Training Track here at Saratoga Race Course for 2018.  Almost as anticipated as Opening Day at the race course across Union Avenue in July–the Oklahoma’s endearing scent of Sweet Timothy brings the nickering of Thoroughbreds and their ponies from far-and-wide. It also brings race fans, media and curiosity-seekers.  This year, it brought rain and grey, as well–but that didn’t dissuade those of us for whom this annual ritual of New Beginnings brings joy.  The horses at Oklahoma are the real harbingers of Spring.

When we bought this place from its previous owners, we inherited the fascinating history, location, reputation–and a lawn jockey.  A B&B on Union Avenue without a lawn jockey would be, why, a sad thing.  So we gratefully took the miniature man as part of our business agreement, and made him our own.

He set up his home cozily on our lovely front porch, and greeted both guests to our establishment, but also citizens and tourists who passed by.

Until.  Until one day when our beloved lawn jockey was stolen–and destroyed.  We won’t spend one more minute thinking about who did it, or why.  That’s negative.

Instead, we’ll tell you about the karmically good thing that happened.  Our Tom was in the Brook one day, and ran into the beloved Tom Bellhouse, COO of West Point Thoroughbreds.  The topic of our trashed lawn jockey came up, and Tom thought that was a travesty.  Tom would not–could not–be an associate of Terry Finley, West Point Thoroughbreds’ President and CEO–were Tom not cut from the same noble fabric as Terry, himself.

One thing led to another, and before we knew it–Terry and Tom made sure that, not only did we have A Lawn Jockey–we became the proud owners of a West Point Thoroughbreds lawn jockey!

He (our jockey) spent his winter in Tom’s office, but yesterday he was taken out, spit-shined and buffed–and put outside again.  Ready to stand guard for another half-year.  Sure, it was raining, and grey.  But it was Opening Day at the Oklahoma–and the horses deserved our very best salute.  A West Point salute, at that.